My personal favorite Word of the Year competition? Easily the one with online voting: Macquarie Dictionary’s Word of the Year wisely waits until the start of the following year to assess what gained traction in the previous 12 months. What’s found on the deep dive are linguistic treasures and a snapshot not only of 2015 but of the year to come as unfamiliar words gain currency. Here’s the English language in motion. 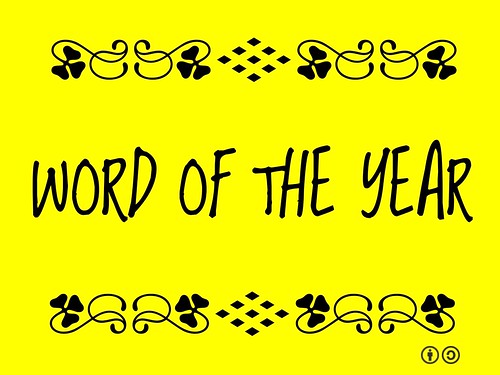 What I love about #macqwoty is its embrace of global culture and local Aussie heritage. It’s difficult to understand the country’s political turmoil of 2015 without understanding former PM Abott’s embrace of the captain’s call. I wish the committee would include the year’s most used hashtags. #Libspill was outstanding political entertainment.

What I find annoying are the entrees that I try to ignore as being too cute or gimmicky, but darnit, they’re darn good words: athleisure, listicle, open kimono and ghost plate.

Captain’s Call = Decision made by a political or business leader without consultation with colleagues.

Ex Situ Conservation = Conservation process by which animals or plants threatened with extinction in their native habitat are preserved by removing them to zoos, captive breeding programs, botanical gardens, aquariums, or by storing their genes in a gene bank.

Fridge-to-fridge party = Party in which participants ride on bicycles from one home to another, consuming alcoholic drinks stocked in the fridge at each location.

Impact Investing = Investing in companies which will have a beneficial impact on the public good as well as generating a financial return for the investor.

Medical Detection Dog = Dog trained to respond to body odours which are indicative of the presence of cancer, the effects of diabetes.

Selfie Drone = Drone quipped with a camera so that it can take photographs and videos from the air of the owner posing or performing various actions.