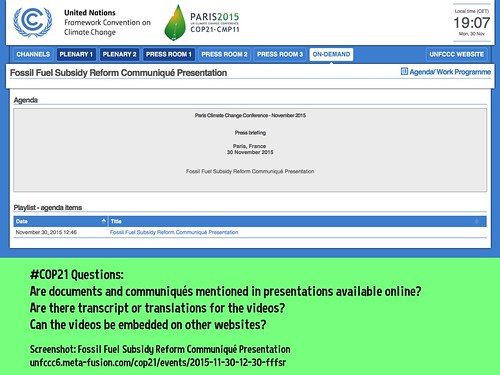 #COP21 Questions:
Are documents and communiqués mentioned in presentations available online?
Are there transcript or translations for the videos?
Can the videos be embedded on other websites?

Parties to the United Nations Framework Convention on Climate Change have recognized that deep cuts in global greenhouse gas emissions are required according to science, with a view to reducing global greenhouse gas emissions so as to hold the increase in global average temperature below 2°C above pre-industrial levels. The elimination of fossil-fuel subsidies would make a significant contribution to this shared objective. By keeping prices artificially low, fossil-fuel subsidies encourage wasteful consumption, disadvantage renewable energy, and depress investment in energy efficiency. The International Energy Agency (IEA) highlights fossil-fuel subsidy reform as a key component of a set of energy measures to combat climate change and estimates that even a partial phase-out of fossil-fuel subsidies would generate 12% of the total abatement needed by 2020 to keep the door open to the 2°C target.1 Accelerating the reform of fossil-fuel subsidies is therefore an urgent priority. Fossil-fuel subsidy reform has both economic and environmental benefits, thereby supporting our shared global commitment to sustainable development. The International Monetary Fund views that fossil fuel prices should reflect not only supply costs but also environmental impacts like climate change and the health costs of local air pollution.2 The majority of fossil-fuel subsidies are also socially regressive, with benefits disproportionately skewed toward middle- and upper-middle income households. Reform will free up financing for sustainable development and support both national and international environmental priorities. At the same time, accelerated subsidy reform needs to be undertaken alongside measures that protect the poor and vulnerable groups from the impact of higher energy prices. Many governments have already committed to reform. The Leaders of the Group of Twenty (G20), for instance, committed in September 2009 to phase out inefficient fossil-fuel subsidies. Asia Pacific Economic Cooperation (APEC) Leaders made a similar commitment in November 2009. Within these forums an increasing number of countries have committed to peer reviews of their fossil-fuel subsidies. A group of non-G20 “Friends” countries3 was established to support global efforts to reform fossil-fuel subsidies, including through the United Nations Conference on Sustainable Development and the United Nations Framework Convention on Climate Change. There is now an urgent need to convert these high-level commitments into practical action. This should be informed by the following three interrelated principles: Communication and Transparency about the merits of subsidy policies and reform timetables, including through engagement and communications with the general public and civil society stakeholders to ensure a smooth, inclusive, bottom-up approach to reform; Ambition in the scope and timeframe for implementing reforms; and Targeted support to ensure reforms are implemented in a manner that safeguards the poorest. We invite all countries, companies and civil society organizations to join us in supporting accelerated action to eliminate inefficient fossil-fuel subsidies in an ambitious and transparent manner as part of a major contribution to climate change mitigation.