The US National Park Service hosts National Parks Week April 18-26 and Planeta.com invites readers and editors to contribute tips and suggestions for visiting and protecting the wilderness areas and historical landmarks. Updates will be made throughout the week on the Planeta Wiki.

“National Parks Week coincides with the annual celebration of Earth Day,” says Planeta.com founder Ron Mader. “We will be paying attention to activities around the USA and around the world. 2016 marks the 100th anniversary of the National Park Service and we’d like to spend 2015 learning about the current challenges faced by the parks as we prepare for a new century of stewardshipand engagement.

Among the parks that will be featured this week: Everglades, Grand Canyon, Lake Mead, Yosemite and Zion.

“Planeta Wiki editors are cordially invited to finesse our online guides so that they include practical visitor tips as well as links to more scholarly reports,” said Mader. “We also invite the public to share photos of parks and protected areas in our World Parks Flickr Group.

Photos and tweets from the national parks are considered for inclusion in our World Parks Flipboard.

Go wild! We’re celebrating parks and protected areas in 2015 with the creation of a calendar archived on Flickr. We’re remixing photos from the parks’ official Flickr accounts and using only the photos with Creative Commons attribution-sharealike licenses, which means you are free to use and download the images provided you give attribution. #FindYourPark and #ShareYourPark!

Which parks have Flickr and other social web channel accounts? See our Google Doc. 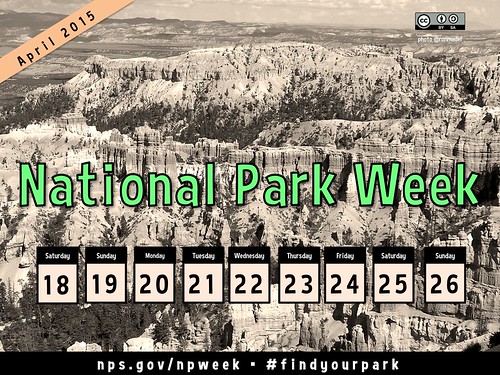