I first started listening to Australia’s Radio National in 2006 as I prepared to deliver a keynote address at the 2007 Aboriginal Tourism Australia conference. I spent a year listening to this radio network to get some insights into what locals thought about indigenous culture, tourism, parks and the environment.

What started out as preparation for a trip continues today out of habit. I care about the communities I visited and I try to stay current with the news. I’ve used Radio National as the benchmark for what I hope to find from public broadcasters around the world. Today the news is about the media itself. Major budget cuts to Australia’s ABC have been announced and one of the first shows to get the ax is a long-time favorite: Bush Telegraph.

For my purpose of learning about rural Australia, Bush Telegraph is the blue ribbon winner at the county fair. The show probes timely issues with depth that otherwise would be unreported. For me it wasn’t so much keeping up with the news as getting insights into what would become headline news — climate adaptation, renewable energy targets, the rise of farmers’ markets and so many more niche topics.

I’m originally from Indiana in the USA and I am all too familiar with farm reporting that has a limited scope of interest. I know the sound of boring radio. Bush Telegraph transcended the genre all the while respecting its core group of listeners out in the bush of rural Australia. Its coverage earlier this month of the World Parks Congress was outstanding, delivering far more than bullet points. Bush Telegraph brought the world to rural Australia and rural Australia to the world. To the producers, host and everyone involved in production, I extend my deepest thanks. Your program will be sorely missed.

No doubt other favorite programs will fall and many will protest the #ABCcuts. This is a bleak week for those employed by the ABC and for listeners around the world.

Can confirm that we at @RNBushTele have been cut. Thanks for your thoughts. We will keep going until Christmas #ABCcuts 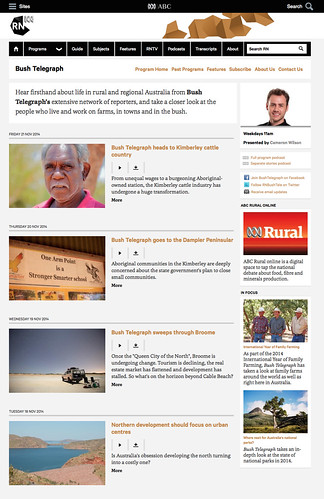