Challenges for the World Parks Congress

Sydney, Australia – This week the 6th IUCN World Parks Congress will be held at the Sydney Olympic Park November 12-19.

How to evaluate the 2014 World Parks Congress? More than a year ago I developed a series of goals for the Congress and I’ll review them in depth during and after the Congress. Before the event begins, I would like to break the ideas down in a different fashion and I submit the following challenges:

Silos – Academics and consultants agree that much of the information about park management and conservation is locked within institutional silos. The congress itself is divided into streams and the question is whether the streams will unite and form a river. Our journey is a shared one. The World Parks Congress will be a tremendous success if we see information sharing and partnerships that transcend the echo chamber.

Debate and Discussion – Hopefully the Congress will promote a lively discussion of timely issues. We look forward to spirited discussions since parks are run in such different fashions around the globe. When there are disagreements, we want to hear them. Participants need to be respectful of one another, but should be encouraged to debate contentious topics.

Commitment – Park conservation and management requires long-term strategies. The promise of Sydney could be grand or it could be a reminder that ‘promises are made to be broken.’ We will collaborate with others interested in documenting the promises made at this event.

Communication – To what degree will the ideas that percolate at the Congress have meaning for the managers of small parks and protected areas, the locals and visitors? While there need to be statements for policymakers, we would encourage language that’s useful to those on the ground. We would to see practical examples of engagement that connects visitors and locals, that protects biodiversity and that sets the stage for the next century of conservation.

New Technology – While previous events have been held concurrently with the Internet, this will be the first World Parks Congress in the age of the Social Web. This means we have the ability now for livestreaming video, for collaborative notetaking, for tweeting and retweeting, liking and sharing. Technology for its own sake is a bore, but technology that gives access to remote participants and creates a legacy archive is the new normal.

Finally, it’s not too soon to think about how to prepare for the Congress in 2024. Imagine an event in which all the keynotes, all the workshops were streamed live and translated into multiple languages. What if the ‘field trips’ were integrated into the documentation of the event? What if satellite events were held not only in the host city but around the globe? There are a myriad of options that should be put on the table now to prepare for future events. 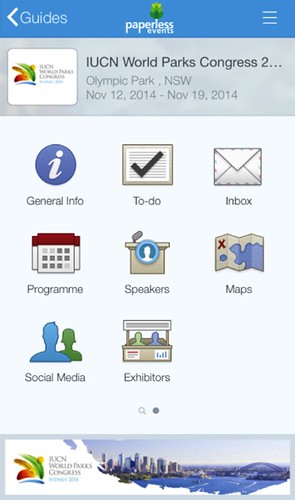