As a remote participant, I loved the fact that I could watch the plenary and breakout sessions. I’ve used NetHui as an example of where I believe tourism and conservation events in particular need to go. What is the purpose of holding events behind closed doors? For those interested in mainstreaming biodiversity, conservation or responsible travel, livestreaming is a no-brainer.

That said, NetHui is its own wonderful beast. The participants who attend and tweet are among the most lively and argumentative on the Web. It’s a mashup of narratives and counter-narratives, all with a Kiwi accent.

On the Planeta Wiki I was able to make a few changes to the New Zealand Wiki as well pages about Auckland, Christchurch and the Maori language (thank you ‘kaupapa’). I’ve also updated a very long Storify recap of the event, but here on this blog are some of my favorite tweets in no particular order, which befits an event that is so approachable and yet uncapturable!

Kia ora fellow NetHuians! We hope you all enjoy share learn teach inspire challenge. Our thoughts & wairua are with you all today #nethui

tip for #nethui speakers – don’t put your phone on the lectern, set on vibrate

Wondering how #nethui would have felt different if a central discourse wasn’t “why can’t I have what I specifically want”?

hmmm – if no-one remembers to search for you on the internet, have you been forgotten? #nethui

If we can’t forget, we will get better at forgiveness. @JCE_PC #nethui

I’ve reminded #nethui of our kaupapa: inclusion and respect. People need to find another hui if they don’t want to play by those rules.

#nethui tears in my eyes as Jordan has our back. Seems such a small thing, makes such a huge difference.

This is what #nethui is about! Love hearing passionate challenging assertions.

#nethui learnt many things but key is that I like the sound of others voices and shall endeavour to listen more.

Yay! #nethuied #nethui blended learning goes beyond the classroom; it enables and empowers the community. Absolutely

PSA: There is no bar at “barcamp” at #nethui; I’ve checked

For most of human history almost everything you did or said would be forever undiscoverable to almost everybody, forever. Privacy. #nethui

#Contentnz are we confusing Wikipedia with the power of wiki? #nethui

Can you help us capture #nethui session discussions? Have a go on the collaborative notetaking documents: http://t.co/cjjBrSStCn

Special thanks to #nethui sponsors – it’s an argumentative tribe and it’s cool you take that and still help make the event happen. #props

Livestreaming worked like a charm until the session on curating New Zealand content. I’m looking forward to watching once the archived videos go up online.

If there is interest from organizers and participants, I would be happy to host a Google+ hangout about lessons learned from NetHui.

Wishlist: I wished the event could have gone outside the doors and shown us more of Auckland. I hope Nethui-South can blend the indoor event with outdoor Christchurch

Wishlist: The Maori Meetup was held the first day sans livestreaming. I’ve learned so much from previous huis that showed us what Maori leaders are doing online. In the future please hold at least one breakout session with a Maori focus point during your livestreaming hours.

Wishlist: Collaborative note-taking is a great idea to keep track of the conversations, but it was underutilized. Before the event participants need guidance such as tipsheets and video tutorials. I’d recommend holding a Google hangout precisely on this notion 2 or 3 weeks before the next event. Show people how it works. As you can tell, I’m a fan of the hangouts, first for the immediate access to the livestream and second for the archive it creates that makes it easy for later viewing. 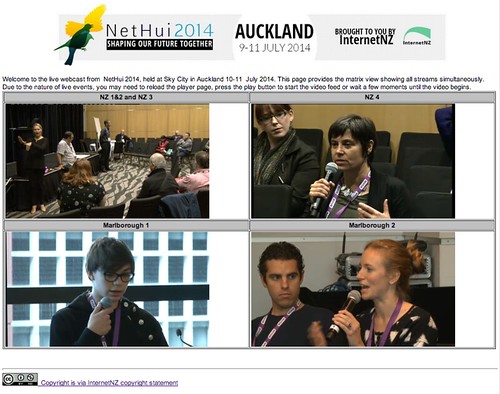