One of my favorite stores in the world is Jarcieria El Arte Oaxaqueño, Mina #317 at the corner of J.P. Garcia; 516-1581. Open 10am-8pm Monday to Saturday and 10am-5pm Sundays. This small store has its own history. In 1961 this store opened its doors and continues to sell an eclectic mix of wooden figures (alebrijes), woven baskets, hojalata figures, tin frames and lampshades, drums and traditional toys, including trompos and baleros. Don Nicodemus Bartolo Vasquez is attentive and a master of dichos, including “el que tiene tienda que la atienda, o si no que la venda.”

Ask for his permission and take a photo in the store. We’d love to see your pictures of the not so fierce animal figures in the World Crafts group on Flickr.

Don Nico includes a small brochure with information about Oaxacan history and customs with each purchase. It’s a small store and well worth a stop en route to the Mercado de Artesanias or the buses to Monte Albán! 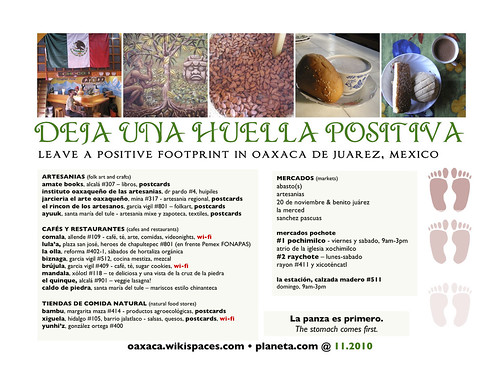